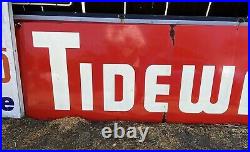 Measures 28' long x 28 tall. Originally mounted on a Depot in VENTURA CALIFORNIA. Some chips to the porcelain at the mounting holes and flex points. This is all clearly shown in the photographs.

Took control of the company. With the merger and creation of "Tidewater Associated Oil Company", Flying A became the primary brand name for the company, though the Tydol and Associated names were also retained in their respective marketing areas. Tydol gasoline station, circa 1945.

During the 1950s, the Associated and Tydol brands gradually fell into disuse, and were dropped entirely in 1956. Acquired the Veedol brand when it bought Burmah-Castrol. In February 2011, BP announced that it would to sell the Veedol brand, which was subsequently acquired by Tide Water India, part of the Andrew Yule. In 1966, Phillips Petroleum Company.

Phillips immediately rebranded all Flying A stations in the region to Phillips 66. On the East Coast that year, Getty merged his numerous oil interests into Getty Oil Company. And Tidewater Oil was dropped as a corporate brand. This item is in the category "Collectibles\Advertising\Gas & Oil\Merchandise & Memorabilia\Signs".

The seller is "ironmanmark" and is located in this country: US. This item can be shipped to United States.